Sargent is another favorite. Most of his work is categorized either under realism or impressionism and I love his work in both styles.

Even though he’s using a limited palette he gets full effect of the colors he is using. This is a wonderful example of effective temperature and value contrast. He captures the atmosphere of this city street so well. The two men look mysterious and foreboding while the woman appears self reflective. She appears a little chilly too, but her arms aren’t wrapped around herself the way one might expect on a cold winter morning, but rather her hands are clasped in front of her and her eyes are slightly downcast giving the appearance that she’s lost in thought. There is a beautiful contrast between the dark twisted strands hanging off her black shawl and the folds of her white dress.

I wanted to post this earlier, but I was having internet connection problems. Might have to reconsider the name Friday Favorite if I keep posting late. Friday Favorite posts are where I share works by artists who influence and inspire me. To see more Friday Favorites, click here. 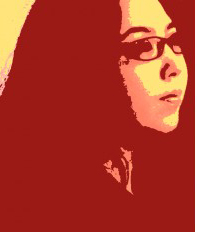